What is his regular practice area: Where does he work? What does he love most about his job?

James is the Assistant General Counsel for Alliance Health, a position he has held since March 2018. He loves that he never gets bored with his job due to the diversity of his work and projects. For instance, James works on a variety of substantive issues from housing to Medicare. He greatly enjoys working with his colleagues. James is als 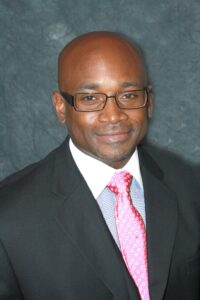 o the executive director for Teen Court in Hoke County and volunteers to train youth attorneys.

What is his most recent pro bono experience?

His most recent pro bono experience was helping grandparents get custody of their grandchild.

How has engaging in pro bono legal service-enriched his career, or enriched him personally or professionally?

Pro bono legal services allow James to assist people who do not have access to the legal system. More specifically, James cited a case in which he helped grandparents acquire custody of their grandchild. He explained that, in that case, the father was not involved and the mother was in jail while the grandparents were raising the child without any financial help. He has also worked as a power of attorney for several seniors who also do not have access to the legal system.

Of what moment(s) from his pro bono work is he the most proud?

James has been most proud in cases where he has helped grandparents gain custody of their grandchild.

What advice would he give someone who has not yet provided any pro bono work?

James explained that it is great and rewarding to give back to people who would not otherwise have access to the legal system. He also said that it gives him a sense of purpose. James even suggested that pro bono work can alter the misconception that attorneys are just money hungry. James advises that attorneys should assist with at least one pro bono case a year and choose an area that they are passionate about.